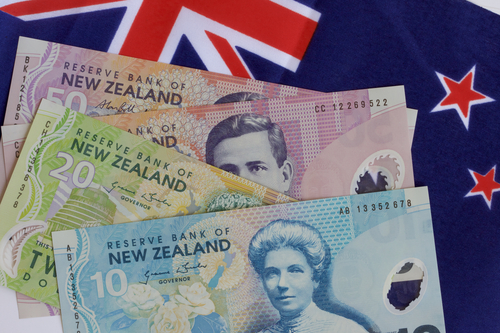 Fed has given a 25 bps cut last week, but the Fed members have divided opinion on monetary policy. Federal Reserve Bank of Boston President Eric Rosengren, who represents hawkish side, said cutting rates now may boost the risk of financial instability, which could make the next downturn more severe when it comes. Vice-Chair Clarida, who is more dovish, reiterated Fed’s concerns via the provision of insurance in the latest cut, from the weakness of the global environment despite the robust economy of domestic U.S.

The U.S. data still stay strong and robust with no massive weaker-than-expected data coming out. USD stays steady and yielded slightly up at the end of last week. Central bankers are very reluctant to show any hint of further rate cut while the market is still betting on another rate cut this year but the market still sees some chance of a further rate cut if the trade war drags and U.S. data fails massively. This week, we are to see the final Q2 GDP number and August Core Durable Goods. If the data still prints to the upside, USD could hold on to its strength amid the trade tensions.

Sterling edged higher last week before paring recent gains, fueled by renewed optimism on Brexit, with European Commission President Jean Claude Junker indicating that he thinks a Brexit deal could be reached by 31 Oct and that he is doing “everything” he can to prevent a no-deal Brexit as that would have been catastrophic. The currency shrugged off disappointing economic data and pushed higher on renewed optimism. However, for this week, we could be seeing the currency trade sideways as investors await results from the meetings Boris Johnson will be holding with key players such as German Chancellor Angela Merkel, French President Emmanuel Macron, Irish Prime Minister Leo Varadkar and European Council President Donald Tusk, as he tries to persuade them to renegotiate the divorce deal they agreed with his predecessor, Theresa May. Meanwhile, the currency’s upside could be limited as money markets are increasing bets for BOE to cut rates given the poor economic data, along with larger volatility nearer to the Brexit deadline as Brexit remains the main driver of Sterling’s performance. On the data front, investors will be keeping a close watch on Public Sector Net borrowing along with the Nationwide Housing Prices which could cause Sterling to slide lower should the numbers miss estimates; though any impact is likely to be short-lived as the key focus remains on Brexit.

Last week, EUR rallied against the greenback, driven by a broad dollar weakness as markets await the FOMC meeting before edging lower on mixed economic data. Looking ahead, investors are waiting for a slew of economic data, with a focus on Germany’s and Eurozone’s PMI data on Monday, Germany’s IFO business climate data on Tuesday, Germany’s GFK Consumer Confidence data on Thursday, industrial confidence and business climate data for the Eurozone on Friday, where missing estimates could cause the EUR to slide lower.

JPY bounced at the end of last Friday as the trade tensions grow with China delegation to the U.S. ending their trips earlier.  But the tensions sooth on Monday after Vice Agriculture Minister Han Jun said his nation’s withdrawal from a planned visit to U.S. farm states had nothing to do with trade talks. Additionally, China’s Ministry of Commerce said trade groups from the two nations held “constructive” talks on relevant economic and trade issues of mutual concern in Washington last week. JPY is sensitive to many things including the trade war and overall risk appetite. Since the trade war tensions thaw slightly, JPY could drop from last week's high. This Tuesday we will see BOJ Gov Kuroda Speak, if he indicates more stimulus in next rate meeting, JPY may face more downward pressure.

Last week Australia's seasonally adjusted unemployment rate edged up to 5.3 percent in August 2019 from 5.2 percent in the previous month and this was in line with market expectations. This was the highest jobless rate since August last year. Further, The Reserve Bank of Australia left the cash rate unchanged at a record low of 1 percent during its September meeting, as widely expected. Policymakers said that it is reasonable to expect that an extended period of low-interest rates will be required to make progress in reducing unemployment and achieve progress towards the inflation target. While this was all in line with market expectations, the weaker data led to the AUD weakening through most of last week.

This week, the Asian session started trading with Australia’s CommBank PMI data for Manufacturing and Services. Data for services were better than expected, however, data for Manufacturing fell below expectations. With no other major news this week, we keep our eyes peeled on further US-China trade talks. Further, investors seem to remain on the sidelines showing mixed global sentiment. All things considered, we turn bearish with low conviction for AUD.

Last week, we see that the Kiwi weakened considerably against the USD. This was probably due to US-China trade talks wherein the preliminary stages, no news on their discussion point to both countries coming to a conclusion. The Kiwi was probably weaker following its strong correlation with the Aussie dollar. The GDP data released last week also showed that NZ’s economy advanced 0.5% on the quarter. While growth has slowed, this data still beat market expectations of 0.4%.

Later this week, on Wednesday, we are expecting a number of high impact news for the Kiwi. Namely the domestic trade balance, interest rate decision followed by RBNZ’s press conference. Market observers are expecting the RBNZ to keep its rates unchanged at 1%. Further, given its strong correlation with the AUD, we continue to watch for how the global risk sentiment plays out in response to the on-going US-China trade talks. With external factors seemingly playing a bigger role for this upcoming week, we turn bearish with low conviction on the NZD.

Last week, high impact news for Canada such as Manufacturing, CPI, Core retail sales all did better than expected. However, Canada’s inflation rate year on year was lower than the previous data released. This was still in line with market’s expectations. Elsewhere, oil prices drifted sideways as Yemeni rebels made fresh announcements stating that Iran would launch yet another attack on Saudi Arabia’s oil and gas facilities. Saudi Arabia has managed to keep a very tight timeline of repairing Aramco’s oil facilities.

Whilst there is no high impact news this week for the CAD, there are however key events to follow closely. Such as the upcoming Canadian government elections and even further developments on the Middle East oil crisis. We turn bullish with low conviction, leaning towards the CAD outperforming in anticipation of such events.

Asia Open | Stocks: A scintillating start to the month for global equity markets as investors put a wall of worry behind them

Markets hit full-blown "liquidity-on” mode, with S&P 500 leading the charge; Sublime policy support makes it hard to disagree with the direction of travel.

The oil rally continues, helped along by positive news on supply; OPEC+ focus will be on Russian and Saudi Arabian commitment to further cuts.