Monthly Volatility Outlook: What Can Push the Forex Markets in April? 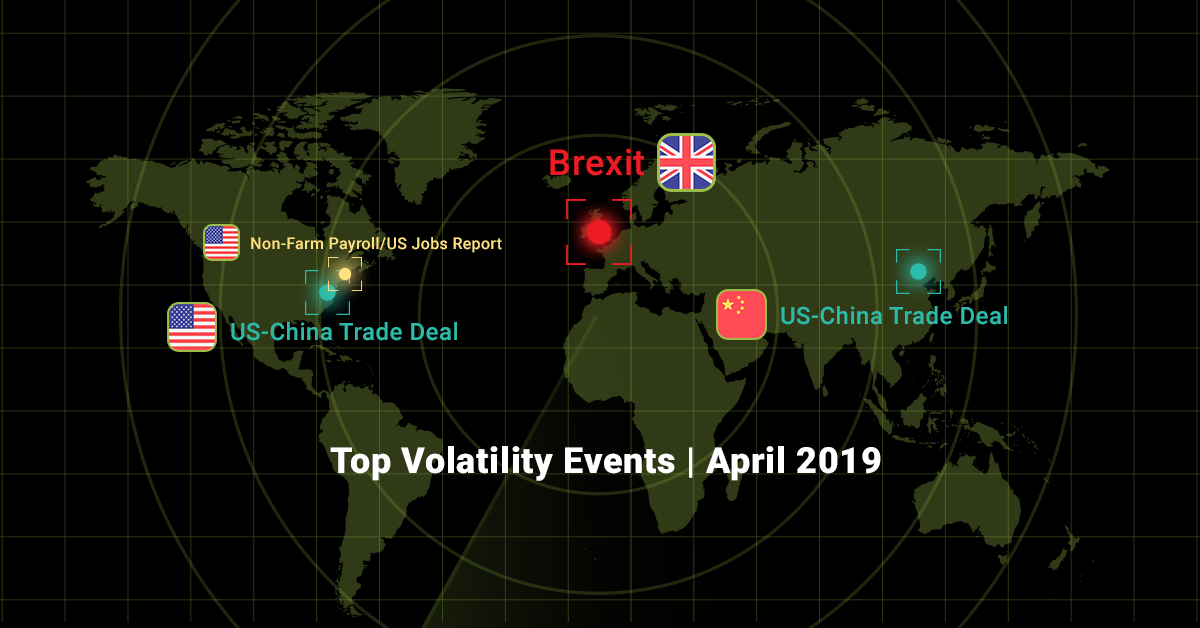 Politics. Trade and economy. Jobs and employment. These are some of the major factors behind market movements.

In this AxiTrader Monthly Volatility Outlook, we look at how these three big issues – Brexit (politics), US-China Trade wars (trade and economy) and the US Non-Farm Payrolls (jobs and employment) can push market volatility in the coming month.

Read insights from the AxiTrader Research and Analysis Team as they dissect the major political, trade and economic and jobs/employment events that may move the markets.

Brexit – What happens next is anyone’s guess

The UK’s attempt to leave the EU will be all-consuming for the pound yet again in April, especially now the Government has a loose extension to the deadline. However, Brexit is a mess, and Sterling traders are getting bored with the continued political point scoring that has plagued the whole process.

We must also face facts, we have no idea whether Brexit will be good or bad for the economy. We also have no idea which scenario is worse, leaving with the PM’s deal or no deal. We know what politicians want us to think, and we know what politicians are warning, but as traders, we don’t know if the warnings are real economic warnings or again a case of political point scoring.

The closer we get to the proposed deadline of April 12 the more volatility we will surely see in Sterling pairs; however, the direction of those moves is particularly hard to call.

Very much like Brexit, the proposed trade deal between the US and China has been an incredibly drawn out process. However, unlike many of the president’s other initiatives the pursuit of China to change what is seen as market-distorting trade and subsidiary practices.

As U.S.-China talks to end a trade war reach their endgame, politicians, executives and foreign diplomats are urging Trump and his team to hold out for meaningful structural reforms in China to address entrenched problems in the relationship that hurt U.S. and other foreign companies and workers.

The president’s team say they are in the final stages of negotiating what would be the biggest economic policy agreement with China in decades. With US officials heading to Beijing in the next few days to accelerate a trade deal this story is likely to drive not just the US dollar but also global stock indices over the next month.

With the US economy under what seems like continuous pressure, it makes the April release of the US jobs report on Friday, April 5 even more important. There is added pressure after last month’s reading came in at a modest 20K new jobs created, a terrible reading when you consider that over 180K new jobs were expected to have been created.

As ever and of course more importantly for the state of the economy is the average earnings numbers these have been strong of late and still show wage growth around the 3.4% level. This isn’t expected to change this month. Wage growth and the overall headline unemployment rate have been fairly steady, even if the NFP reading has not.

In truth, this isn’t such a big deal for the economy. However, the biggest moves in markets come when we start to look at how the central banks will react to the data. The Fed and Fed Chair Jerome Powell have been particularly dovish of late, and that continued over the last few weeks. Continued weak data out of the US, including the jobs data, coupled with the lack of progress between the US and China means that the global economic headwinds will continue to keep the Fed dovish and cautious of changing their policy stance.

Asia-Open: The remarkable ridiculousness of the equity rise

After another choppy and busy day, risk assets held sway as the latest fiscal storm has passed – at least it appears that way for now.

Oil prices appear to be in the right spot and possibly poised to take the next step higher to forge a new trading range.