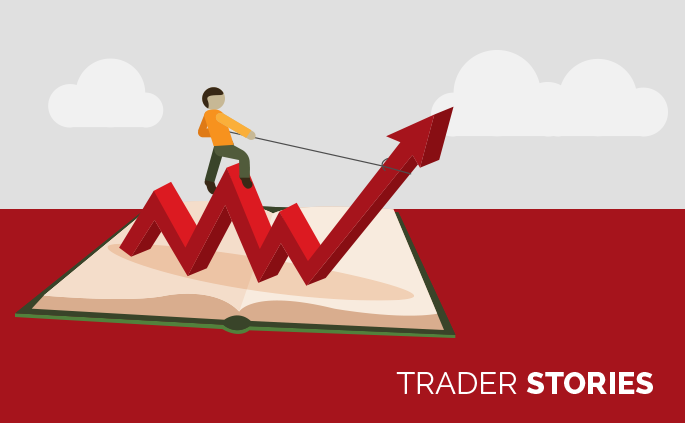 The following is a guest blog post by AxiTrader customer Nick, where he shares his learnings from his foray into the Forex market.

It’s not just a job, occupation or hobby. It’s a way of life that can very quickly become a religion or a bankruptcy case in the wrong conditions. Self-control, discipline and risk management in the face of uncertainty are much more important than the technical aspects of trading.

A little less than a year ago I discovered the concept of trading currencies. I had always known there were exchange rates and such, but to narrow in on the exact method of making trades day after day was a novelty to me. I researched and read almost anything I could get my hands on, but the time came that I had to try for myself.

I opened a few different demo accounts until I found a web platform that I liked (please shop around), and I traded demo on it. It was utterly exhilarating to realise at once all the things I didn’t know. At this time I also formed a second mental compartment – things I thought research had prepared me for when it hadn’t.

My first “system” was simply my intuition, which was to look for maximum confidence and bet on continued confidence. Look for higher highs, in other words. I made 60 demo pips on a single trade and it felt pretty cool. Of course I was trading about 1% of my $250 demo balance, so it wasn’t even imagined riches, but it was better than that. It was both challenging and fun.

It was a bit like cogito ergo sum. In absence of any other proof that I was a trader – I had traded. It may not have been in any real respects a good trade, but it was a trade nonetheless. Some sort of threshold had been crossed.

I had read some things and I continued to play around with demo – so was I ready? Not even close. I knew that as a financially challenged 20-something with reality fast approaching I was far too likely to disrespect the trade by treating it as a silver bullet.

I wanted to learn, so I enrolled to study basic economics in summer school. In terms of content, I didn’t learn anything I couldn’t have learned online. Most of my exam revision was simply watching videos on Khan Academy. But it was a chance at immersion. A chance to eat sleep and breathe money.

It’s important to note that parallel to this study, I read all sorts of stuff that wasn’t on the reading list. Heilbroner gave me an insight into some of the greatest economic minds in recent centuries. Shiller and Akerlof let me in on their theory of Animal Spirits. Nassim Nicholas Taleb taught me how to let go of the illusion of certainty in multiple different ways, and even harness volatility.

I read interviews with top traders in Market Wizards 1 & 2. I watched documentaries and trawled trading forums long after midnight. The more I learned, the more I wanted to learn — and that holds true to this day. (Trader with Paul Tudor Jones is great if you can get your hands on it.)

I passed summer school, and considered that I might finally be ready to try trading. With a much more solid idea of the macroeconomic factors and actors to look out for, I committed an amount I was comfortable with the idea of losing to a real money account. It was and is enough to risk 1% of my account on any given trade, while setting sensible intraday stop losses. (I cannot recommend the 1% rule highly enough. In a way, it takes a lot of unnecessary worry out of the process.)

For about a week and a half, I was on cloud nine. I added 3.5% to my balance within a month. My ratio of winners to losers was over 4:1. I was good at trading… And when I caught myself thinking that, I knew something was going wrong.

Statistically, I was doing too well. Trading the NZD/USD pair, I picked the top of a move to within a pip, for a full 50 pip win. I was making small gains left right and centre. Fooled by randomness i.e. beginner’s luck.

I will give myself credit for one thing, though. When the news came in about an explosion in New York, I went straight for my tablet and made a series of profitable trades against the greenback, only stopping when the news reports could say with some certainty that they knew the cause (wasn’t a terrorist). It was here that I was particularly grateful for the reading I had done on uncertainty and risk management. If there was ever a time to make money it was right then during the breaking news, but I still only risked 1% of my account on any given trade.

Pretty soon, though, the 3.5% gain turned into a 1.5% loss. I was getting a little bit cocky, and willing to experiment and reinvest the money I had made. After all – there would always be more. And when I caught myself thinking that way, I knew it was time for a break.

It sounds odd to list my greatest achievement in forex trading as losing less than 2% of my account. It might even sound facetious. All I know is that it’s true. Limiting my losses is the only thing in my trading career I can’t attribute to pure dumb luck. I may have picked a 50 pip move upwards perfectly, but that doesn’t mean anything at all in the grand scheme of things. It means I entered some numbers and clicked okay, and the market did what it was always going to do anyway.

At this stage in my life, I would be happy if I could trade for a living. But the flip side of what that means is, I shouldn’t be trading unless I’m doing it for a living. Trading demands attention, and making good decisions, which is quite taxing mentally. So why do it for less than you’re worth?

Still, I consider myself a trader. Why? What gives me the right? It may be a fair question. I think (a) it’s a mentality as much as anything else – and (b) by actively not trading, I’m defining my risk as very close to zero, and holding out for a better deal. When I ask myself who would think that way, my conclusion is a sensible trader on a long timeframe. So I fill my days with other things, happy to think about the future.

My philosophy as a new forex trader is one of patience, preservation of capital, and the proposition that you only have to get rich once. It’s not my philosophy. I took it from a rich person. But it works. I can rest easy with the knowledge that I didn’t blow my account, and that a not insignificant balance is still sitting there, ready for the day when I find a good place to park it.

Remember – you only have to get rich once! And that being the case, blowing an account because it’s small and you lose interest is the worst possible thing anyone can do. And yet it happens time and time again. In a fit of one emotion or another, a bad decision is made, a margin call is inevitable, and another angry consumer believes the system is rigged and all brokers are scammers.

Trading as I see it is acting on imperfect information. It’s collating everything we can, going forward, in order to sketch what we hope is an accurate picture of the present. Then considering that present, trading is simply making logical bets with sensible sized risk. (To various firms the currency market also represents a chance to hedge in very practical ways, but I’m talking in terms of small retail traders.)

On the subject of sensible risks, there is a pet peeve I would like to address. With a whole array of changing statistics and a batch of central banks to keep watch over, there is enough to worry about in trading without choosing an unregulated broker. Don’t waste time having to wonder something as banal as whether you will get paid your profits.

Trading requires a conscious appreciation of all the risk, elegance and wild volatility in the world – actually, perhaps the universe. Letting a sentiment as beautiful as that drown in the muck of an unreliable or shady broker is not only counter productive, it’s actually not that intelligent if you examine the options. It’s not something a trader would do.

There’s a lot of misinformation out there. Trust yourself primarily – you have to live with every trading decision.